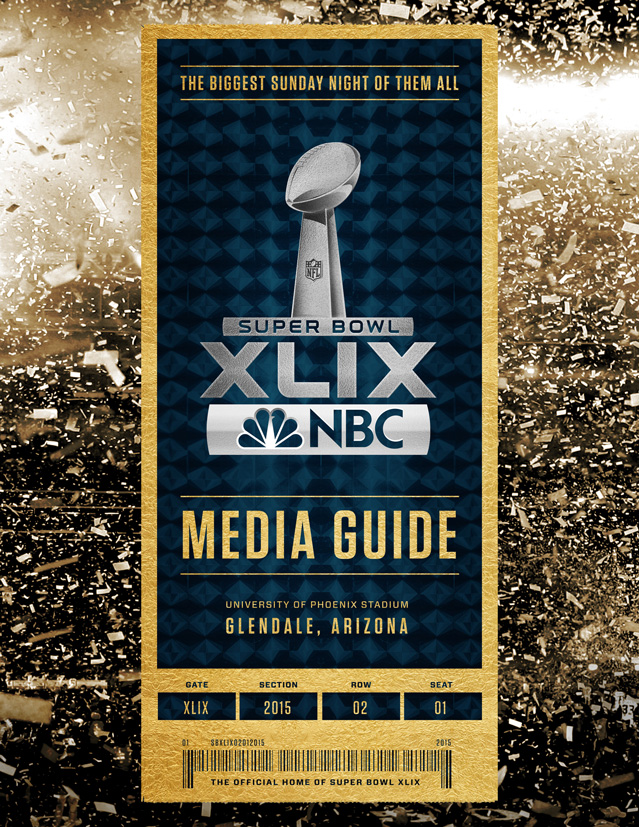 The NBC Sports Communications Department is available to assist media with information, photos and interview requests for Super Bowl XLIX.

The History of the NFL on NBC

1939 – NBC broadcasts the first-ever NFL game on network television to the approximately 1,000 sets in New York City, a contest between the Philadelphia Eagles and Brooklyn Dodgers at Ebbets Field.

1961 – NBC awarded a two-year contract for radio and television rights to the NFL Championship Game for $615,000 annually.

A bill legalizing single-network television contracts by professional sports leagues is introduced in Congress by Rep. Emanuel Celler. It passes the House and Senate and is signed into law by President John F. Kennedy.

1970 – Four-year television contracts, under which CBS would televise all NFC games and NBC all AFC games (except Monday night games) and the two would divide televising the Super Bowl and AFC-NFC Pro Bowl games, announced.

1977 – NFL Commissioner Pete Rozelle negotiates contracts with the three television networks to televise all NFL regular-season and postseason games, plus selected preseason games, for four years beginning with the 1978 season. NBC received the rights to all AFC regular-season and postseason games (except those in the ABC Monday Night package) and to Super Bowls XIII and XV. Industry sources considered it the largest single television package ever negotiated.

1982 – The NFL signs a five-year contract with the three television networks (ABC, CBS, and NBC) to televise all NFL regular-season and postseason games starting with the 1982 season.

1986 – Chicago defeats New England 46-10 in Super Bowl XX on Jan. 26. The NBC telecast replaces the final episode of M*A*S*H as the most-viewed television program in history, with an audience of 127 million viewers, according to Nielsen figures, in addition to drawing a 48.3 rating and a 70 share.

1990 – New four-year TV agreements are ratified for 1990-93 for ABC, CBS, NBC, ESPN, and TNT at the NFL annual meeting in Orlando, Fla. The contracts totaled $3.6 billion, the largest in TV history.

1998 – NBC ends a 33-year relationship with professional football declining to bid for the AFC package.

2005 – NBC is awarded the rights to the NFL's Sunday Night primetime package, which includes the 2009 and 2012 Super Bowls. Flexible scheduling is offered for the first time. The NFL in primetime (ABC's Monday Night Football concluded its 36th and final season in 2005) is the second longest-running network primetime show in history behind 60 Minutes.

2009 – "Sunday Night Football" leads NBC to primetime wins in 15 of 16 Sunday nights, is the No. 1 program of the primetime television season among the coveted 18-49 demographic and is the second most-watched show in primetime.

2010 – "Sunday Night Football" averaged 21.8 million viewers, ending the fall television season and the most-watched show in primetime, the first time on record (since the advent of people meters in 1987) that a sports series has been the most-watched show from the start of the primetime TV season to the end of the NFL regular season, and defeated its nightly competition every week.

2011 – The NFL and NBC agree on a landmark nine-year media rights extension making NBC the home of "Sunday Night Football" through the 2022 season. The agreement also includes the addition of a Thanksgiving night game, three Super Bowls, a Wild Card and Divisional Round playoff game, enhanced flex scheduling, Spanish-language rights, increased digital rights and increased use of NFL and NFL Films footage.

The critically acclaimed "Football Night in America," the most-watched sports studio show on television, had its best season ever, averaging a record 8.9 million viewers.

Six NBC NFL telecasts averaged at least 25 million viewers – the most in a season since the "SNF" package debuted on NBC in 2006 and the first time since 2005 that any fall primetime show had six episodes topping 25 million viewers in the Sept. 1-Dec. 31 time period ("Desperate Housewives" and "CSI").

2014 – Despite the most-lopsided games since NBC acquired the NFL primetime package in 2006 (average victory margin of 18.3 points), "Sunday Night Football" averaged 21.3 million viewers – on pace to be primetime TV's No. 1 show for the full (Sept.-May) television season for the fourth consecutive year.

"SNF" ranked No. 1 in the Adults 18-49 demographic for the seventh consecutive fall TV season.

Michaels and Collinsworth at the Super Bowl

When NBC broadcasts the Super Bowl on February 1 in Phoenix, the men behind the microphones will be the multi-Emmy Award-winning duo of Al Michaels and Cris Collinsworth. They will call their second Super Bowl together. Their first Super Bowl call was Super Bowl XLVI on NBC in February 2012, which was the most viewed program in U.S. television history at the time.

For Michaels, who has been called "TV's best play-by-play announcer" by the Associated Press, this marks his ninth Super Bowl and his third for NBC.

For Collinsworth, the most honored studio analyst in sports television, this is his third time calling a Super Bowl. He previously called Super Bowl XXXIX for Fox in a three-man booth with Joe Buck and Troy Aikman. Collinsworth also played in two Super Bowls as a wide receiver for the Cincinnati Bengals (XVI, XXIII).

Super Bowl XLIX By the Numbers

NBC Sports Group will present its most comprehensive social media campaign ever to promote NBC's coverage of Super Bowl XLIX, including around-the-clock coverage across all of NBC Sports' social media platforms.

NBC SPORTS "SOCIAL CENTRAL": During Super Bowl week, the NBC Sports social media team will be everywhere from Media Day to the sidelines on Super Bowl Sunday, covering every moment and play of #SB49. During gameday, NBC Sports' "Social Central" will be a communications hub for all things social, spanning from "Super Bowl Central," NBC Sports Group's primary home for studio programing during Super Bowl week, located in downtown Phoenix, Ariz., and University of Phoenix Stadium in Glendale, Ariz., to NBC Sports Group's International Broadcast Center in Stamford, Conn. Members of the NBC Sports social, digital, and marketing teams will be primed and ready to cover and react to any moment from pre-game through the final whistle and trophy presentation, including a social team member embedded with on-air production to relay any breaking news. Social media and digital content will be updated in real time.

PATRICK PETERSON TO SERVE AS SOCIAL MEDIA & DIGITAL CORRESPONDENT: Arizona Cardinals DB Patrick Peterson, a four-time Pro Bowler, will serve as NBC Sports Group's social and digital media correspondent during Super Bowl week. As a member of the hometown Cardinals, Peterson will document his Super Bowl week on behalf of NBC Sports through his social media accounts. He will also film several videos around the city that will be pushed out through the SNF social media accounts and on NBCSports.com, including attempting to break the GUINNESS WORLD RECORDS® record for most selfies taken in one hour.

TUMBLR: As announced yesterday, NBC Sports Digital recently launched a Super Bowl-centric NBC Sports Tumblr page that will showcase Super Bowl XLIX's television advertisements immediately after they air on NBC. Prior to Super Bowl Sunday, the page will be populated with original content created by NBC Sports' marketing media team, as well as from re-blogging NFL-related Tumblr posts. On game day, the new page will transform into a hub for Super Bowl TV ads, and can be accessed at NBCSports.com/Ads.

#MYSUPERBOWLPICK: NBC Sports will ask influencers, celebrities, athletes and fans to tweet and post who they anticipate will win the game using #MySuperBowlPick to help drive the conversation around game day. In addition, social media handles from various NBCUniversal properties and celebrities will offer their picks.

Using the "Twitter Mirror," NBC Sports will collect photos and picks from celebrities and athletes on-site at "Super Bowl Central" and at University of Phoenix Stadium to be featured on-air. The SNF social media accounts will also be tracking fan picks to see which team is leading the social vote.

AROUND-THE-CLOCK COVERAGE: NBC Sports will cover Super Bowl XLIX from various Sunday Night Football and NBC Sports social media accounts to make sure every fan has access to the content they want leading up to the game.