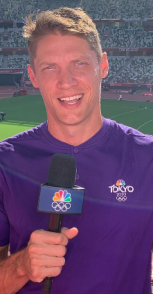 Trey Hardee serves as a track & field analyst, specializing in the field and combined events. He joined NBC Sports in 2016, making his debut at the 2016 U.S. Team Trials and later working on the Rio Olympics. Hardee also worked on the Tokyo Olympics in 2021.

Hardee enjoyed an illustrious career as a decathlete, winning the silver medal in the decathlon at the 2012 London Olympics. He also competed at the 2008 Beijing Olympics. Hardee won gold at the 2009 and 2011 World Championships, and won silver at the 2010 World Indoor Championships.

Hardee had a decorated career as a student-athlete. After competing at Mississippi State for two years, he transferred to Texas, where he won the decathlon at the 2005 NCAA Outdoor Championships. In 2006, Hardee set the NCAA decathlon record with 8,465 points and was named the 2006 NCAA Division I Men’s Indoor Field Athlete of the Year.