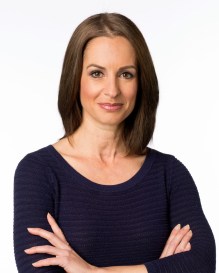 Tracey Myers joined NBC Sports as its Blackhawks Insider in 2010 after a whirlwind three-day, weekend freelance audition covering the Stanley Cup champion Blackhawks at their third annual fan convention. It was fitting that she was welcomed to Chicago and the beat by Hawks goaltender Marty Turco, as Myers covered Turco for two seasons as the Dallas Stars beat reporter during her 10-plus years at the Fort Worth Star-Telegram. In addition to her work with the Stars at the Star-Telegram, Tracey has had a hand in covering the 2009 NFL Draft, Dallas Mavericks, Cowboys training camp, the PGA’s Byron Nelson and Colonial tournaments. Myers has also appeared on Fox Sports Southwest as a guest analyst for Stars broadcasts, as well as talking pucks on XM Radio and Canadian broadcasts.