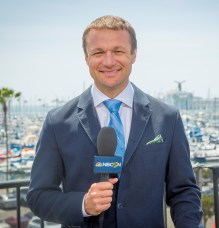 Bell made his television debut as a color commentator for INDYCAR broadcasts on Sky Sports in Europe, and also served as an analyst of SPEED’s F1 coverage. Bell has driven in numerous domestic and international motorsport series for more than two decades, and has competed in the Indianapolis 500 on 10 occasions, finishing in fourth place in 2009. He began his racing career in the Barber Dodge Pro Series, and ascended to the Indy Lights series in 2000, where he finished second behind Scott Dixon before winning the series title in 2001. Bell drove in the CART series in 2001 and 2002 before a season in Formula 3000 in 2003.

In 2012, Bell made his professional sports car racing debut with Alex Job Racing, winning the prestigious 12 Hours of Sebring on the first attempt. He followed that performance with a victory in the 2014 Rolex 23 at Daytona, and won the 24 Hours of Le Mans in the GT-Am class in 2016.

Bell is a native of San Luis Obispo, Calif., and currently resides in California with his wife Heather and sons Jaxon and Jensen.