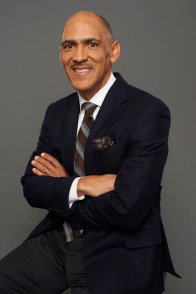 Tony Dungy, one of the most influential voices in football today, will serve as an analyst for NBC’s Super Bowl LVI Pregame Show on February 13, 2022, marking his fifth Super Bowl broadcast assignment with NBC.

Dungy, the historic Super Bowl-winning head coach whose teams made the playoffs each of his last 10 seasons, unprecedented in his era, serves as an analyst on NBC’s Football Night in America, the most-watched studio show in sports. Dungy received the game’s most coveted individual honor when he was inducted into the Pro Football Hall of Fame in 2016.

Dungy joined NBC’s Emmy-nominated studio show Football Night in America as an analyst in 2009 and was nominated for a Sports Emmy after his very first season, a rare accomplishment, and later again in 2013. He made his NBC Sports debut during the network’s coverage of Super Bowl XLIII, and served as a studio analyst for Super Bowl XLVI, Super Bowl XLIX, which became the most-viewed program in U.S. television history, and Super Bowl LII.

Despite his soft-spoken demeanor, Dungy has made a profound impact on the game of football in his current role:

“Has morphed from a Super Bowl winning coach to the voice and conscience of the NFL.” – USA Today

“He is the rare coach who may have more influence after leaving the sideline than he had on it.” – New York Times

As a coach, Dungy made the playoffs in his final 10 seasons as a head coach before retiring from the NFL in 2008 (seven with Indianapolis; three with Tampa Bay). His crowning achievement came in Super Bowl XLI, when he became the first African-American head coach to lead his team to a Super Bowl victory as the Colts defeated the Chicago Bears, 29-17. A former NFL defensive back, Dungy is one of only four men in NFL history to win a Super Bowl as both a player and head coach, joining Mike Ditka, Tom Flores and Doug Pederson.

In 2010, Dungy was inducted into the Colts’ Ring of Honor, and was later inducted into the Tampa Bay Buccaneers’ Ring of Honor in September 2018. As head coach of Tampa Bay from 1996-2001, Dungy guided the Buccaneers to the playoffs four times, including the NFC Championship game in 2000. In his 13 seasons overall as a head coach, Dungy’s teams posted a losing record just once, his first season in Tampa Bay, which was infamous for its on-field struggles prior to his arrival.

Off the field, Dungy is renowned for his contributions to the community – both for civic and charitable causes. In August 2007, President George W. Bush appointed Dungy a member of the President’s Council on Service and Civic Participation. The 25-member council represents leaders from government, business, entertainment, athletics and non-profit organizations committed to growing the spirit of service and civic participation. Dungy is also a best-selling author.