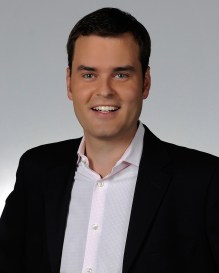 During his time at GOLF Channel, Abbott has worked on numerous major championship and Solheim Cup broadcasts, and has contributed to NBC Sports Group’s Ryder Cup and Presidents Cup tournament coverage. He has reported on some of the game’s most memorable moments, including The 2009 Open at Turnberry when Tom Watson made a historic run at the Claret Jug, and from Copenhagen on the vote that restored golf as an Olympic sport. Previously, he also contributed to several of the network’s original production projects, including the original series, Big Break.

Abbott was born and raised in London, England, and has been an avid golfer since his early teenage years, moving to the United States to attend Mercer University in Macon, Ga., on a golf scholarship. While in college, he caught the broadcasting bug and worked for WPGA-TV (Macon) and CBS-46 in Atlanta. Before coming to GOLF Channel, Abbott was the sports director for WCAV-TV in Charlottesville, Va.