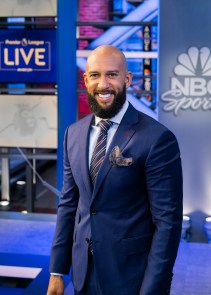 Tim Howard is an analyst for NBC Sports’ Premier League coverage including Premier League Mornings, Premier League Live, and Goal Zone — pre- and post-match shows which appear on NBC, NBCSN and Peacock. Howard was named to his current role in August 2020.

A former Premier League and United States Men’s National Team goalkeeper, Howard made his broadcast debut with NBC Sports on Oct. 27, 2013 – while playing for Everton — joining Arlo White in the booth for a Chelsea-Manchester United match. Over the next two seasons, he commentated on numerous Premier League matches and studio shows for NBC Sports. Howard also served as an analyst on Turner Sports’ Champions League coverage from 2018-20.

Highlighting a more than two-decade playing career, Howard made 45 Premier League appearances with Manchester United (2003-06) before signing with Everton (2006-16), where he made a total of 414 appearances over 10 seasons with the club. Howard, the USMNT’s most-capped goalkeeper with 121 appearances, set a World Cup record with 16 saves in the United States’ 2-1 loss to Belgium in the 2014 World Cup Round of 16.

Howard also played nearly 200 Major League Soccer games with the MetroStars (1998-2003) and Colorado Rapids (2016-19). He is currently minority owner and sporting director for Memphis 901 in the USL Championship, where he also started four games in goal this past spring.