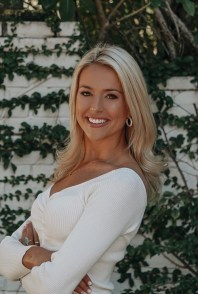 Sara Perlman serves as a host for halftime and post-game coverage for the 2022 USFL season. Perlman joined the NBC Sports team in March 2021 as a sports betting host and content creator for NBC Sports EDGE and PointsBet, the official sports betting partner of NBC Sports.

Perlman serves as co-host of “Bet the Edge,” NBC Sports’ betting-focused podcast with Drew Dinsick. She also previously was a host of NBC Sports’ “The Daily Line,” which featured topical and entertaining sports talk with a focus on sports betting.

Before joining NBC Sports, Perlman was the host of FOX Sports’ “Talk the Line” during the 2020 NFL season, hosted “Countdown to Kickoff” on Radio.com in the 2020 NFL postseason, and served as the Baltimore Orioles’ sideline reporter on MASN in 2019.

A collegiate soccer player at American University and graduate of the University of Florida, Perlman began her career as the sideline reporter and color analyst for the Fort Lauderdale Strikers of the North American Soccer League. She has also served as a cage-side reporter for MMA fights on “UFC Fight Pass.”