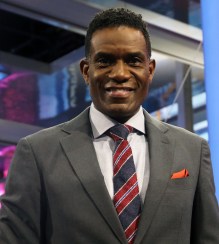 Since retiring from the soccer pitch, Earle has established himself as a versatile sports journalist working in print, radio, television and digital media. Earle has worked for the London Evening Standard, the Stoke-on-Trent Evening Sentinel, Capital Radio, BBC Radio 5 Live, and numerous other major English media organizations.

During his soccer career, Earle played in more than 600 league games and scored approximately 150 goals.  He began his professional career with Port Vale (1982-1991) and signed with Wimbledon in 1991.  Earle was a member of Wimbledon’s legendary “crazy gang” side; he captained the team for five years and was named Wimbledon Player of the Decade in 2000.

Although born in Newcastle-under-Lyme, England, Earle was eligible to play for the Jamaican National Team (1997-2000) due to his heritage.  He was captain of the squad for two years and in 33 international caps, he scored a total of eight goals, including Jamaica’s first-ever World Cup Finals goal versus Croatia in 1998.

Earle was awarded an MBE (Member of the Order of the British Empire) in 1999.  He has served as an Honorary Patron of Show Racism the Red Card, the campaign that uses footballers to educate against racism.