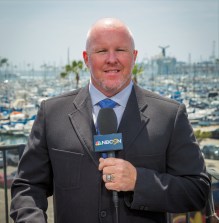 Paul Tracy, former INDYCAR, and CART and Champ Car driver, serves as an analyst for NBC Sports’ INDYCAR coverage on NBC and NBCSN. Tracy made his debut as an analyst on select INDYCAR races in 2014. Tracy brings more than 20 years of racing experience to the broadcast booth, including 31 wins, 74 podiums and 25 pole positions in both CART and IndyCar racing.

Tracy’s career highlights include a second-place finish at the 2002 Indianapolis 500, and an impressive 2003 season, when he recorded three consecutive victories to start the year and won the CART/Champ Car World Series season title. Tracy was also named RACER Magazine Racer of the Year in 2003, and earned the SPEED Most Popular Driver Award that season as well.

Tracy competed in his first CART race in 1991 at the Long Beach Grand Prix as a member of Dale Coyne Racing. Tracy signed on with Penske Racing mid-year in 1991 as a test driver and has since competed for numerous CART teams including Newman/Hass Racing, Team KOOL Green and Forsynthe Racing. He has also raced for a number of IndyCar teams, including Vision Racing, AJ Foyt Enterprises, KV Racing, Dreyer & Reinbold Racing and Dragon Racing.

Tracy is a native of Scarborough, Ontario, and currently resides in Arizona with his wife and two children.