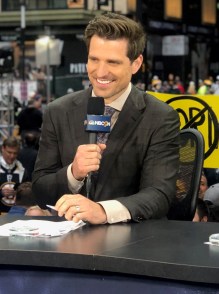 Originally a third-round pick (95th overall) by the Philadelphia Flyers in the 2001 NHL Draft, Sharp’s NHL career spanned a total of 15 seasons with the Flyers, Dallas Stars, and Chicago Blackhawks. Sharp won the Stanley Cup three times as a member of the Chicago Blackhawks (2010, 2013 and 2015). Sharp was a member of the Canadian men’s ice hockey team that won the gold medal at the 2014 Olympic Winter Games in Sochi, Russia. He also won MVP honors in his lone NHL All-Star Game appearance in 2011.nbc sports &

Sharp also boasts a championship at the American Hockey League level as a member of the 2004-05 Philadelphia Phantoms. He made his professional hockey debut in the 2002-2003 season after a pair of seasons at the University of Vermont

In addition to his contributions to NBC Sports’ NHL coverage, Sharp also serves as a studio analyst on NBC Sports Chicago Blackhawks broadcasts

A native of Winnipeg, Manitoba, Sharp currently resides in the Chicago area with his wife and children.