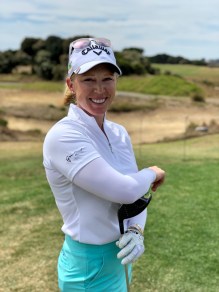 Morgan Pressel serves as an analyst and on-course reporter for LPGA Tour, PGA TOUR and USGA coverage on GOLF Channel and NBC. Pressel joined GOLF Channel and NBC Sports in March 2021, with her first on-air appearance coming at the LPGA Drive On Championship presented by Volvik at Golden Ocala.

Owning one of the most decorated careers in women’s amateur golf history, Pressel became the then-youngest player to ever qualify for the U.S. Women’s Open in 2001 at age 12. On the LPGA Tour, she became the then-youngest-ever winner of a modern major championship when she won the 2007 ANA Inspiration (formerly the Kraft Nabisco Championship) at age 18. Still competing on the LGPA Tour, Pressel is a six-time member of Team USA at the Solheim Cup and owns two career LPGA Tour victories.

Pressel brings prior on-air experience to her role with GOLF Channel and NBC. In addition to serving as a guest on-course reporter for LPGA Tour coverage on GOLF Channel, Pressel has been an analyst for the U.S. Senior Women’s Open as well as digital coverage of the U.S. Open for FOX Sports.