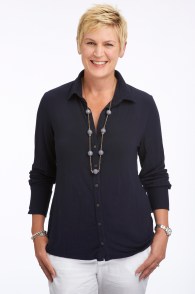 Solomon became the first woman to serve as executive producer for a national sports network with her appointment at GOLF Channel. Previously, she served as Executive Vice President of Content and Executive Producer, GOLF Channel, and oversaw all aspects of production and programming, including tournament coverage, news, original productions, and operations. Solomon worked closely with media rights partners to elevate prestigious golf championships, including THE PLAYERS, The Open, KPMG Women’s PGA Championship, and the new FedExCup Playoffs, as well as launching new events, such as the Drive, Chip and Putt National Finals and the Augusta National Women’s Amateur. She also oversaw the network’s production of golf’s return to the Olympic Games in Rio in 2016.

From 2006-12, Solomon served as the Coordinating Producer of NBC Olympics and was involved in every facet of production and planning, including program development, operational planning and the hiring and assigning of on-air talent and production staff. In addition, she produced figure skating at the 2010 Vancouver Games, as well as the Opening Ceremony and primetime show for the 2012 London Games.

During the 2000 Sydney Olympic Games and the 2004 Athens Olympic Games, Solomon served as the coordinating producer of NBC’s Olympic cable coverage. Before that, she served as a feature producer and associate director with NBC Olympics. She began her NBC career in 1990 as one of two Olympic researchers for NBC’s Emmy Award-winning coverage of the Barcelona Games in 1992.

Between her Olympic assignments, Solomon had been involved with many NBC Sports productions. She served as the studio show producer during USA Network’s coverage of the US Open and NBC’s “Late Night Wimbledon” show (1998-2002 and 2005-07). Other assignments have included serving as the co-producer of the NBA on NBC studio show for two years. She also worked extensively on NBC Sports’ golf production for six years (1993-99).

A 13-time Emmy Award-winner, Solomon won a Gracie Award from the American Women in Radio & Television for her Beijing Olympics work. She was also a producer on NBC’s primetime coverage of the 2008 Beijing Olympics Opening Ceremony, which won a prestigious Peabody Award. Solomon was named “Woman of the Year” by WISE (Women in Sports Events) in 2008, and following the 2004 Athens Olympics, the Sports Business Journal named her one of its “Forty Under 40.” In 2001, Solomon was named one of six “Women to Watch” by Cablevision.