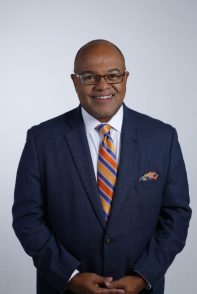 Wrote The Associated Press in January 2021: “Smooth, informational, funny and opinionated when needed, Tirico simply is the best no matter what sport he is announcing. The more Tirico the better.”

This fall, Tirico will call primetime NFL games for his 17th consecutive season, including 10 years as the voice of ESPN’s Monday Night Football. In addition, 2022 marks his 27th season as an NFL primetime studio host or play-by-play voice.

In May 2022, Tirico earned the Sports Emmy for Outstanding Sports Personality – Studio Host, following an unmatched year in which he anchored the Tokyo Olympics in primetime, the Super Bowl LVI Pregame Show, Football Night in America, horse racing’s Triple Crown, golf’s U.S. Open, and the Indianapolis 500.

The 2022 Beijing Olympics was Tirico’s third as NBC’s primetime Olympics host (Tokyo, Pyeongchang). He served as an NBC daytime host at the Rio 2016 Olympics.

In February 2019, Tirico was named host of NBC Sports’ inaugural coverage of the Indianapolis 500. Earlier in the same month, he called play-by-play for his first-ever NHL game, after previously hosting the 2018 Stanley Cup Final, 2019 NHL Winter Classic, and 2019 NHL All-Star Game.

Tirico made his NBC Sports Group debut in July 2016 as host of NBC Sports’ live coverage of The Open from Royal Troon in Scotland. Shortly thereafter, he made his Olympics debut as host for NBC’s daytime coverage of Rio 2016. Also that fall, Tirico served as host of The Ryder Cup and NBC’s primetime coverage of the Breeders’ Cup World Championships.

Tirico joined NBC after 25 years at ESPN/ABC (1991-2016), where he established himself as a preeminent broadcaster on properties and events including Monday Night Football, The Open, The Masters, NBA, college football, college basketball, FIFA World Cup, and tennis’ U.S. Open and Wimbledon. Tirico, the voice of ESPN’s Monday Night Football from 2006-2015, is one of four play-by-play announcers to work primetime NFL games for at least 10 seasons (Al Michaels, Frank Gifford, Mike Patrick). He was named the 2010 Sportscaster of the Year by the National Sportscasters and Sportswriters Association (NSSA), an award voted on by his industry peers.

Tirico joined ESPN as a SportsCenter anchor in July 1991, later serving as host of Monday Night Countdown during the NFL season from that show’s 1993 launch to 2001. From 1993-1997, he anchored ESPN’s college football studio show. In December 1996, Tirico was named golf host for ABC Sports, and in 2002, began calling NBA games for ABC, ESPN, and ESPN Radio. In addition, he hosted SportsCenter coverage of the U.S. Open, The Masters and the Daytona 500, and anchored coverage of the Super Bowl, NCAA Final Four, and NFL Draft for both television and radio.

Prior to joining ESPN, Tirico worked in Syracuse, N.Y. (1987-1991). He was sports director at WTVH-TV and served as play-by-play voice for Syracuse University basketball, football, lacrosse and volleyball.