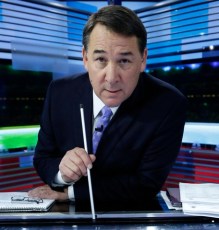 Former NHL player, coach and general manager Mike Milbury will serve as a game analyst for NBC Sports’ hockey coverage at the 2018 Olympic Winter Games in PyeongChang. This marks Milbury’s third Olympics assignment with NBC Sports, having served as a hockey studio analyst in Vancouver (2010) and Sochi (2014). Milbury has transitioned to the booth this year for NBC Sports’ NHL coverage while game analyst Eddie Olczyk undergoes treatment for colon cancer.

Since 2008, Milbury has been the lead studio analyst on NHL Live, NBC Sports Group’s pre-game and post-game studio show.

Milbury’s extensive career in hockey includes 12 seasons as a player with the Boston Bruins, as well as stints as a general manager for the New York Islanders and head coach of the Islanders and Bruins. In his first season as head coach of the Bruins in 1989-90, Milbury led the club to the Stanley Cup Final. Milbury spent two seasons with Boston before joining the New York Islanders in 1995 as head coach and general manager. He served in that capacity until 1999, when he was named senior vice president of the team.