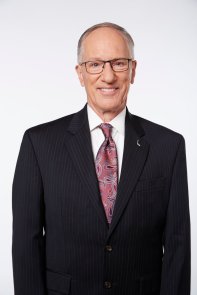 Following a 47-year career broadcasting professional hockey, Mike “Doc” Emrick announced his retirement on October 19, 2020. Although retiring, Emrick will remain a member of the NBC Sports family by occasionally writing and narrating video essays for its future NHL coverage.

A record eight-time Emmy Award-winner, Emrick served as the lead play-by-play voice for NBC Sports Group’s NHL coverage since 2006. He joined NBC and NBCSN on a full-time basis in 2011, after serving as the television voice of the New Jersey Devils for the previous 18 seasons (21 overall). Following 47 years covering professional hockey, including nearly 40 in the NHL, Emrick called more than 3,750 hockey games in his storied broadcast career.

Emrick has called some of the most important and most-watched games in the modern era of hockey, including:

On December 12, 2011, Emrick was one of five individuals, and the first-ever broadcaster, inducted into the United States Hockey Hall of Fame. Emrick has also won a record eight Emmy Awards for “Outstanding Sports Personality, Play-by-Play,” including an unprecedented seven consecutive Emmys in the category from 2014-2020 and seven New York region Emmy Awards for “on-camera achievement.”

Emrick has worked on 22 Stanley Cup Finals series and has called 45 Stanley Cup Playoff Game 7s, 19 NHL Winter Classic and Stadium Series games, and 14 NHL All-Star Games. He previously served as the television voice of the Philadelphia Flyers, 1988-93, as well as a telecaster for PRISM-TV, 1980-83. Emrick has also called hockey games for CSTV, ESPN, and FOX, and also spent time as a radio broadcaster for more than 100 hockey games on WNBC/WFAN-AM, from 1983-88.

In addition to his work on television and radio broadcasts, Emrick has contributed to NHL.com, and provided voice-overs for Hockey Week, NHL Power Week, the NHL’s Stanley Cup video, Sony NHL video games, and EA Sports video games. His other sports broadcasting credits include covering the NFL, NCAA men’s basketball, track and luge.

Emrick has covered hockey for 50 years, beginning in the 1970-71 season as a freelance reporter covering the Pittsburgh Penguins for the Beaver County Times. From 1971-1973, Emrick called play-by-play for Bowling Green State University, where he later earned his Ph.D. in broadcast communications. He then served as the radio/TV broadcaster and public relations director of the IHL’s Port Huron Flags (1973-77) and the AHL’s Maine Mariners (1977-1980).

A lifelong fan of the Pittsburgh Pirates, Emrick participated as a second baseman in the 2012 Pirates Fantasy Camp in Bradenton, Fla., playing for Team Clemente. Emrick was also invited to serve as a play-by-play announcer, during select innings, for two of the Pirates spring training games in 2016.

A native of LaFontaine, Ind., Mike and his wife, Joyce Anne, are joined by their canine children and horses at their home outside of Detroit, Mich.