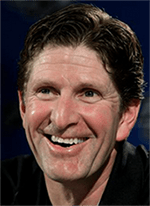 Mike Babcock serves as a studio analyst for select games of NBC Sports Group’s coverage of the NHL on NBC. Babcock joined NBC Sports in January 2021. Babcock has coached in the NHL for 17 seasons, winning 700 games as a head coach, the 8th most all-time, with the Anaheim Ducks, Detroit Red Wings and Toronto Maple Leafs. He won the Stanley Cup in 2008 with the Red Wings and led the Ducks to a Finals appearance in 2003. Babcock also won gold medals at the helm of the 2010 and 2014 Canadian men’s Olympic hockey teams, becoming just the second head coach in history to lead one country to gold in consecutive Olympic Games.