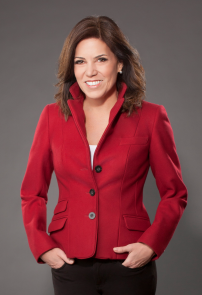 Michele Tafoya is the sideline reporter for NBC Sunday Night Football and a four-time winner of the Sports Emmy for Outstanding Sports Personality – Sports Reporter, as well as the only person nominated in all 10 years of the award’s existence. The San Francisco Chronicle noted that Tafoya is “widely recognized as the best sideline reporter in sports.” In Sept. 2021, she begins her 11th season on the NBC SNF sidelines.

SNF averaged 16.8 million TV viewers in 2020 (with a Total Audience Delivery average of 17.4 million viewers), and finished the fall-spring season as primetime’s #1 TV show in all key metrics for an unprecedented 10th consecutive year – adding to its record for the most successive years atop the charts (since 1950), based on official live plus same day data provided by Nielsen.

After working her primetime record 250th NFL game (regular season and playoffs) on September 16, 2018, The Associated Press profiled her under the header “Tafoya masters difficult job of sideline reporter.”

Tafoya worked Super Bowl LII on February 4, 2018, marking her third Super Bowl on the sidelines for NBC, and fourth overall.

Tafoya joined NBC Sports Group in 2011, and in her first year with NBC, she was awarded the Sports Emmy for Outstanding Sports Personality – Sports Reporter. She earned the honor again following the 2013, 2018 and 2020 NFL seasons.

Tafoya has covered a wide range of sports beyond the NFL.

At the Tokyo Olympics and Rio Olympics, she was assigned to the swimming venue, providing reports and conducting interviews with athletes including record-setting Olympic champions Michael Phelps, Katie Ledecky and Caeleb Dressel.

In 2013, she hosted Golf Channel’s premiere series Big Break NFL, which debuted October 8, 2013. A year earlier, Tafoya worked as a sportsdesk reporter for NBC during the 2012 Olympic Games in London, the most-watched event in U.S. television history. Previously, she handled rhythmic gymnastics and softball play-by-play at the 2000 Sydney Olympics and hosted late night for CBS’ coverage of the 1998 Nagano Games.

Prior to joining NBC Sports Group, Tafoya spent more than a decade at ABC/ESPN where she saw her profile rise steadily since 2000 through a variety of on-air roles, most notably as a reporter for Monday Night Football and ESPN’s NFL studio programs.

On Christmas Day 2006, Tafoya combined her high-profile NFL and NBA responsibilities to complete a rare double, covering the Lakers-Heat broadcast in the afternoon on ABC, as well as the Jets-Dolphins MNF game that same evening on ESPN. A year later, she completed a similar feat, working the MNF season-finale in San Diego on Christmas Eve, followed by the NBA’s Suns-Lakers Christmas Day game in Los Angeles on ABC. In the fall of 2008, Tafoya stepped down from her role as an NBA reporter to spend more time with her family.

A versatile talent, Tafoya has worked as the play-by-play announcer and as a studio host for men’s and women’s NCAA basketball and WNBA coverage, as well as sideline reporting for college football and basketball. She has been a substitute host on Pardon the Interruption and a panelist on Sports Reporters.

Prior to ABC/ESPN, Tafoya worked for CBS Sports from 1994-2000 as a game reporter and studio host for NFL, college football and college basketball telecasts. In addition to hosting CBS’ late night Winter Olympics programs in 1998, she also hosted CBS’ NCAA Tournament selection show, 1998 Goodwill Games and U.S. Open coverage. She was also a WNBA commentator on Lifetime from 1997-99.

Earlier in her career, Tafoya worked as a host and Minnesota Vikings sideline reporter for KFAN-AM in Minneapolis (1994-98). During that time, she also served as a Minnesota Timberwolves host and sideline reporter for the Midwest Sports Channel and play-by-play commentator for Big Ten women’s basketball and volleyball. From 1995-1998, she was a sports anchor and reporter at WCCO-TV in Minneapolis. Prior to her roles in Minnesota, she worked for WAQS-AM in Charlotte (1993), where she was the first female analyst to call UNC-Charlotte men’s basketball games.

The American Women in Radio and Television honored Tafoya twice with a Gracie Award: in 2014 for “Outstanding On-Air Talent in a Sports Program” for her work as a sideline reporter on Sunday Night Football, and in 1997 for “Outstanding Achievement by an Individual On-Air TV Personality” for her WNBA work with Lifetime. The American Sportscasters Association voted Tafoya among the top female sportscasters (No. 4) in 2009, while the Davie-Brown Index ranked her among the most likeable TV sports personalities in 2006, including “Biggest Trend-Setter.”

Tafoya and her husband Mark Vandersall have two children.