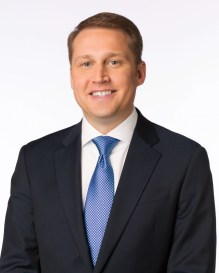 One of the original members of the NBC Sports Chicago on-air team, Arlington Heights, IL native Luke Stuckmeyer is an award-winning anchor who is currently the co-host of the network’s nightly sports news and entertainment program In the Loop.  He previously handled anchor/reporting duties for SportsNet Central while also handling reporting duties for Cubs baseball and Bulls basketball. Stuckmeyer’s work has been recognized numerous times by The Associated Press and Emmys over the years. In 2009, Stuckmeyer won a Midwest Emmy Award for his half-hour documentary, “On the road with Ryno.” From 2000-04 he served as a sports anchor/reporter in San Antonio while covering the world-champion Spurs and handling halftime show duties for CBS affilitate KENS-TV. Before that, he was a sports anchor at KOLN-TV in Nebraska and WLUC-TV in Michigan. Stuckmeyer has covered everything from the Super Bowl, the NBA Finals and National Championships to the Kentucky Derby. Stuckmeyer is a graduate of Prospect High School in Mt. Prospect and holds a bachelor’s degree in Communications from Valparaiso University.