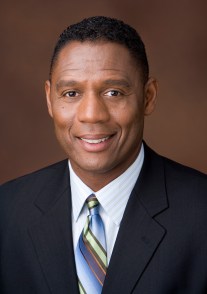 Lewis Johnson serves as a reporter for NBC and NBCSN’s coverage of track and field. Johnson returned for his 10th Olympic assignment with NBC Sports during the 2018 Olympic Winter Games in PyeongChang, where he served as a bobsled, luge and skeleton reporter. The former track star, who broke into broadcasting as a runner for ABC Sports and ESPN,  has gone on to earn a series of coveted assignments since joining NBC Sports in 1999.

Johnson’s current duties include various track & field coverage for both NBC and ESPN, as well as college football reporting for NBCSN. He has also served as the sideline reporter on NBC’s coverage of Notre Dame Football, and has filed stories for the critically acclaimed and most-watched NFL studio show, Football Night in America.  Previously, he was a reporter for NBC’s NBA on NBC and Arena Football League broadcasts as well as anchoring the NBC Sports Update Desk.

Johnson has covered many historic moments. During the 2002 Olympic Winter Games from Salt Lake City, Johnson served as a reporter for NBC’s Special Features Unit, where his contributions included interviews during coverage of the Opening and Closing Ceremonies and a memorable feature on gold medal-winning U.S. speed skater Derek Parra’s visit to Home Depot, where he worked while training for the Olympics. Johnson also reported from the bobsled venue, where Vonetta Flowers became the first African-American athlete to win a gold medal at a Winter Olympics. At the 2004 Olympics in Athens, Johnson was part of NBC’s track and field team, working as an analyst in addition to working as a reporter during the diving competition. While Johnson won critical praise for his role as track and field analyst at the 2000 Sydney Olympics, it was his work on breaking news stories that demonstrated his abilities as a reporter. Johnson twice joined Bob Costas in the studio to report on breaking news: first to report on U.S. shot-putter C.J. Hunter’s pre-Games positive doping charge and again when French sprinter Maria Jose-Perec mysteriously fled Australia.

After an All-American track career at the University of Cincinnati, Johnson competed professionally in Europe for seven years where he was ranked in the Top 10 in the U.S. at 800 meters and competed in the U.S. Olympic Trials in 1988 and 1992. He began transitioning into broadcasting in 1993 with ABC Sports and ESPN, and in 1995, Johnson made his network debut on ABC as the post-race interviewer for the network’s coverage of the Track & Field World Championships in Sweden.

Johnson was working as a stage manager for Turner Sports at the 1994 Goodwill Games in St. Petersburg, Russia when he got his first on-air break. He called the 10K race-walk event, which unexpectedly featured a classic finish with a Russian and the Spanish world record-holder dueling to the finish. Johnson retired from athletics in 1995 to pursue a career in television full-time.  He worked for four years with ABC Sports as a college basketball and college football reporter, before joining NBC in 1999.