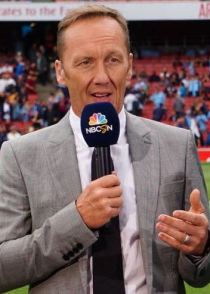 Lee Dixon has served as a Premier League analyst since NBC Sports kicked off its exclusive U.S. media coverage in the 2013-14 season.

One of Arsenal’s all-time greatest defenders, Dixon began his career in the lower leagues of English football, playing as a right-back for the likes of Burnley, Chester City, Bury and Stoke City. He was then signed by legendary Arsenal manager George Graham in January of 1988, beginning a tenure in north London that would span nearly 15 years.

Memorably, Dixon was part of the Arsenal team that won the 1988-89 top-flight title in the final moments of the season at Liverpool, and later, helped the club to two ‘double’ successes – in 1997-98 and 2001-02. In all, Dixon played in more than 600 games for Arsenal, winning four league titles, three FA Cups, a League Cup and a European Cup Winners’ Cup. He retired in 2002 at the age of 38.

Internationally, Dixon made 22 appearances for England.