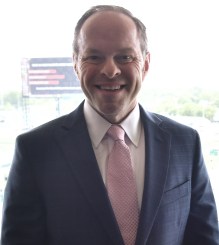 Larry Collmus joined NBC Sports Group in April 2011 as the race caller for the network’s coverage of the Triple Crown (the Kentucky Derby, Preakness and Belmont), and Breeders’ Cup. In 2015, Collmus began as NYRA’s signature race caller. One year later, Collmus called American Pharoah’s Triple Crown win – the first since Affirmed in 1978 – and the first-ever win in horse racing’s “grand slam” when American Pharoah ran for victory in the 2015 Breeders’ Cup Classic. In 2018, Collmus called his second career Triple Crown winner, when Justify achieved the historic feat.

Prior to his role with NYRA, Collmus was the announcer at Churchill Downs, Gulfstream Park and Monmouth Park.

Collmus got his start by calling his first race at Bowie Race Track in 1985 at the age of 18. In 1985 and 1986, he served as the assistant announcer at Laurel Park, Pimlico, Bowie and Timonium Racetrack in his native Maryland. In 1987 he became the youngest race caller in the country after being named to the position at Birmingham Turf Club in Alabama. Following his time at Birmingham, Collmus moved to California and became the announcer at Golden Gate Fields in the San Francisco area, a position he held until 1991, when he moved to take over announcing duties at Suffolk Downs in East Boston, Massachusetts.

Collmus’ move to a major summer racing circuit occurred in 1994 when he became the announcer at Monmouth Park, host of the 2007 Breeders’ Cup. After spending 2 years as the winter announcer at Aqueduct Racetrack, he became the full time announcer at Gulfstream Park in 2007. Seven years later, Collmus was named the race caller at historic Churchill Downs.

In addition, Collmus has called races at Saratoga Race Course, Belmont Park, Santa Anita Park, and the Meadowlands as well as numerous races on ESPN, Fox and CBS.