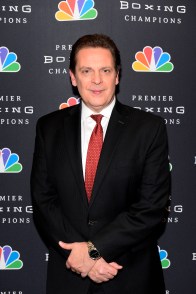 Rice has contributed to NBC Sports’ thoroughbred racing coverage since 2000, including the Kentucky Derby and Preakness Stakes. Rice joined NBC and NBC Sports Network’s coverage of boxing in 2012 when he was assigned to be the play-by-play announcer for the networks “Fight Night” series.

Rice has also worked on a variety of horse racing shows on ESPN, including hosting “2Day at the Races,” and served as both host and reporter for their “Racing to the Breeders’ Cup” and “Road to the Triple Crown” series.

Rice has been honored with several citations for excellence in his career.  In 1988 he was named Kentucky Broadcaster of the Year by the State Horsemen Association.  In 1996 Rice was presented with the Englehard Award by the Thoroughbred Owners and Breeders Association for lifetime achievement in reporting on Thoroughbred racing and breeding.

In 1996, Rice won an Eclipse Award for outstanding local TV coverage of thoroughbred racing.  From 1980-99 Rice was the sports director at WTVQ-TV in Lexington.