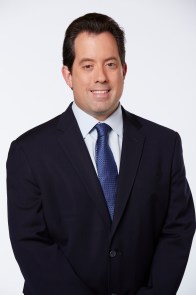 Kenny Albert makes his Summer Olympics debut as a track and field play-by-play announcer for the 2016 Rio Olympics. Rio marks Albert’s fifth Olympics with NBC Sports Group; he has called men’s and women’s ice hockey for every Olympic Winter Games since 2002.

Kenny Albert, one of the most versatile broadcasters in sports, calls NHL games for NBC Sports Group and serves as blow-by-blow announcer for select Premier Boxing Champions (PBC) shows on NBCSN. Albert is the only national play-by-play broadcaster who calls football, basketball, baseball, hockey, and boxing.

Albert has served as the radio play-by-play voice of the New York Rangers since 1995. He has served as play-by-play commentator for the NFL on FOX since the network’s inaugural season in 1994 and has been in the booth for five NFC Divisional Playoff games and three BCS bowl games. Albert has also called MLB games on Fox since 2001, and occasionally handles play-by-play for the Knicks on MSG Network.

Albert called play-by-play of the Stanley Cup Finals for the NHL Radio network in 1994 and 1995, and has called NHL games for ESPN2, OLN and Versus (now NBCSN).  From 1992-95, Albert was the television voice of the Washington Capitals, following two seasons as radio voice of the American Hockey League’s Baltimore Skipjacks.

Albert graduated from New York University in 1990 with a Bachelor’s degree in broadcast journalism. As an undergraduate he called play-by-play for NYU basketball on WNYU radio.

Albert currently resides in New Jersey with his wife, Barbara, and daughters Amanda and Sydney.