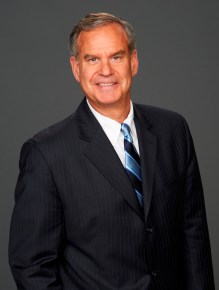 Ken Goss was named Executive Vice President of Remote & Studio Operations, NBC Sports Group, in October 2020. He is responsible for the development of and implementation on remote and studio technical operations and production planning across NBC Sports Group, which includes overseeing all aspects of field and studio production management, field engineering, technical field managers, and mobile unit facilities.

Goss has been part of 12 Olympic Games in various capacities, beginning with the Seoul Games in 1988 as a production manager. At the Barcelona Games in 1992, he served as a manager of venue operations, and since 2004, Goss has served as an operations producer.

Goss joined NBC Sports as a unit manager in August 1985. He began his career in 1983 as a studio/field scheduling coordinator for NBC Broadcast Operations.

Goss is the recipient of 15 Sports Emmy awards for both sports and Olympic broadcasts.

A graduate of the University of South Carolina with a degree in Business Administration, Goss and his wife, Cheryl, have two daughters.