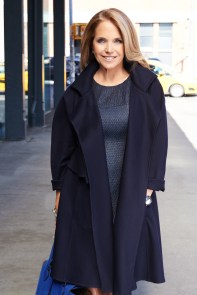 Couric is an award-winning journalist, cancer advocate, documentary filmmaker and New York Times best-selling author of The Best Advice I Ever Got: Lessons From Extraordinary Lives.

Couric launched her production company, Katie Couric Media in the spring of 2015 and is actively involved in a number of scripted and unscripted projects including: FLINT, for Lifetime with Craig Zadan and Neil Meron; and SCRAPS, a series about sustainable food for the FYI network.  She also hosts a podcast on the Stitcher network with Brian Goldsmith, featuring conversations with boldfaced names in politics, media and popular culture.

Couric’s documentaries include: Gender Revolution: A Journey with Katie Couric, for National Geographic; Under the Gun, which aired on EPIX; and Fed Up, which looks at the roots of the obesity epidemic and is currently available on Netflix.  Following the success of Gender Revolution, Couric is partnering with National Geographic on America Inside Out with Katie Couric, a six-part documentary series that will take a deep dive into the revolutionary changes and major social issues of our time.  The series premieres on National Geographic on April 11, 2018.

Couric joined CBS as the first woman at the helm of an evening news cast after a 15-year run as co-anchor of NBC’s Today Show.  Prior to that, she was the deputy Pentagon correspondent for NBC News.  Couric recently served as the Global New Anchor for Yahoo News, interviewing a variety of leading political and cultural figures and anchoring breaking news coverage.  Her daytime talk show, which was syndicated by ABC-Disney, aired from 2012 – 2014 and averaged two million viewers daily.  It remains the highest premiere of any new daytime talk show.

Her awards include a duPont-Columbia, Peabody, two Edward R. Murrows, a Walter Cronkite Award from the University of Southern California’s Annenberg School, and multiple Emmys.  She’s been recognized by the Harvard School of Public Health with the Julius B Richmond Award (the highest honor) and the American Association for Cancer Research Award for Distinguished Public Service for her advocacy for cancer research and awareness efforts. Couric has also received a Medal of Honor from the American Cancer Society, the highest civilian honor.

Born in Arlington, Virginia, Couric graduated with honors from the University of Virginia in 1979 with a bachelor’s degree in English and a focus on American Studies.  She has two daughters, Ellie and Carrie, and lives in New York City with her husband, John Molner.