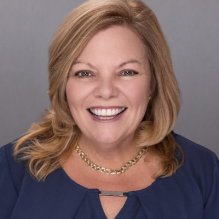 Delaney is an Emmy award-winning broadcaster who has interviewed over 12,000 people in her 20 year radio and television career.  She is one of the first women to ever host a solo Sports Radio Talk Show on WFAN in New York City and KRLD in Dallas. She’s covered 15 Super Bowls, 10 U.S. Opens, and 15 Final Fours.  She has also been to the Kentucky Derby 10 times along with the other two Triple Crown races–the Preakness and the Belmont.

Delaney’s not just a face on the tube or a voice on the radio. As a business woman she ran The Golden Broadcasters radio network as Chief Operating Officer. She negotiated contracts for millions of dollars with show hosts, advertisers, and network personnel and helped to negotiate the rights for the Texas Rangers for CBS.

Delaney is a graduate of Ohio University and lives in Dallas with her husband Paul and golden retriever Mahalo (Hawaiian for thank you).