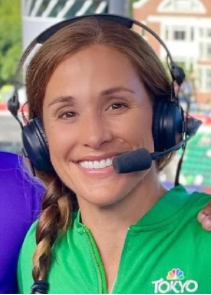 Kara Goucher is a track and field analyst for NBC Sports, specializing in the distance events. The two-time Olympic marathoner made her NBC Sports debut in 2021 during NBC Sports’ presentation of the U.S. Olympic Team Trials for track & field, followed by the Tokyo Olympics.

Prior to joining NBC Sports, Goucher enjoyed a successful career as a professional runner. She competed in the 2008 Beijing Olympics and the 2012 London Olympics for the United States, where she notched top-10 finishes in the marathon at both Olympic Games along with an 8th-place finish in the 5,000m in Beijing. Goucher also won a silver medal in the 10,000m at the 2007 World Track & Field Championships and has finished on the podium at both the New York City and Boston Marathons.

Goucher had a decorated collegiate career at the University of Colorado, winning three NCAA championships across track and cross country for the Buffaloes. She graduated in 2001.