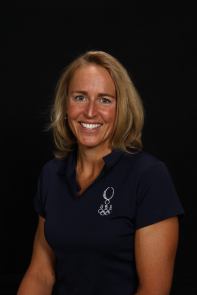 Ertel attended college at the University of California, San Diego and helped lead the Tritons to two national water polo championships. She also was a four-year college All-American and named UCSD’s Outstanding Female Athlete in 1995.  Following college, she continued to train and travel with the national team and helped bring home the silver medal at the 2000 Summer Games in Sydney, Australia.

After the 2002 Olympics, Ertel began competing in triathlons. In the summer of 2002, Ertel ventured to compete at the national championships in Coeur d’ Alene, Idaho, and then to the World Championships in Cancun, Mexico, where she became the Amateur World Champion. Ertel also competed in the triathlon at the 2008 Summer Olympics in Beijing, China.

Ertel resides in San Diego Calif., with her husband and two children.