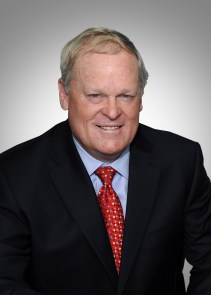 Johnny Miller – a 24-time winner on the PGA Tour – was named lead analyst on NBC Sports’ golf coverage team in 1990 and quickly made his mark as the sport’s most candid commentator.  As NBC’s 18th-hole tower analyst – working alongside host Dan Hicks – Miller provides an appealing mix of spontaneity and humor to go along with his honesty and reverence for the game.

His candor and insight have helped him earn both critical kudos and viewer appreciation.  According to Golf World magazine, “Miller claims the top spot (in a rundown of golf’s top commentators) by virtue of his impact on a telecast.  Controversial, profound, slightly witty, ultra-candid.  He probably had the best playing career of the announcers and now he’s the best at this profession.”

In a fan survey in Sports Illustrated, Miller was named Favorite Golf Analyst. In a 2002 survey, the readers of Golf Digest named Miller Best Analyst on Television for the third time.  Miller was honored as top analyst in the May 2002 and May 2003 issues of Travel & Leisure Golf.  “Those surveys are great,” said Tom Roy, Executive Producer, NBC Sports, “but we already knew Johnny was the best analyst.”  In the October 2003 issue of Golf Digest, Miller was named the most powerful person in television (just ahead of Roy) and 16th most powerful person in golf overall.

In 2002, Miller earned his fourth Emmy nomination for Outstanding Sports Personality/Analyst, a rarity for a golf commentator.  “Johnny has an uncanny ability to predict what’s going to happen,” Roy added.  “He doesn’t second-guess, he first-guesses.  He always goes out early in the morning and talks to players and caddies.   He goes out on the course to examine the greens.  At the Open he even steps off the fairways. He is so prepared when he goes on the air.”

Hicks:  “For all the thousands of hours Johnny’s been on the air, there are always more nuggets in his unique mind to uncover.  That’s my job – to set him up for those fascinating insights.”

Miller explains his on-air philosophy:  “My goal in announcing is to speak just like I’m in the living room with you and we’re having pizza and I’m just letting go.  Whatever I think comes out. I’m going to do the best job with the most honesty inside me to say, ‘here’s what I think just happened.’ The announcing is a little bit like teaching.  I address a player’s mistakes and sort of give a lesson on TV.  When I played, I didn’t play down the middle and I don’t announce down the middle.  That would be boring.”

Miller burst upon the PGA Tour in 1973, when he carded a masterful final-round 63 – “The Miracle at Oakmont” – to surge from six strokes back to beat Arnold Palmer, among others, and capture the U.S. Open championship.  That 63 stands as a final round record for a major championship.  The U.S. Open victory gave Miller an enviable USGA double, as he had won the U.S. Junior Amateur in 1964.  He remains the only player to have won both the Junior and the Open.  Miller made his first U.S. Open appearance in 1966 as a 19-year-old at his home course, the Olympic Club in San Francisco, with a remarkable tie for eighth.

Miller went on to dominate the mid-1970s with 14 tournament victories between 1974-76 and was the PGA Tour’s leading money-winner and Player-of-the-Year in 1974.  That year, Miller won eight PGA Tour events, the most since Arnold Palmer scored eight wins in 1960 and an achievement that went unmatched until Tiger Woods notched nine official PGA Tour wins in 2000.

Miller collected his second major championship title at the British Open in 1976.  Miller was a member of the victorious U.S. Ryder Cup teams in 1975 and 1981 and the U.S. World Cup teams in 1973 and 1975.  His credits also include the 1983 Chrysler Team championship with Jack Nicklaus and the AT&T Pebble Beach Pro-Am in 1987.

After graduating from BYU with a degree in physical education in 1969, Miller turned pro.  He went on to win 25 PGA Tour events, two major championships and two individual World Cups.  His most recent victory – an upset even in his own mind – came at the 1994 AT&T Pebble Beach Pro-Am, where he posted a seven-under 281 to win by one shot.

In October 1996, Miller was selected as the year’s sole inductee to the PGA Tour Hall of Fame, part of the World Golf Hall of Fame in St. Augustine, Fla., and was inducted in May 1998.  In 1997, the National Golf Foundation honored the Miller family with that year’s Jack Nicklaus Golf Family of the Year Award.

Miller and his wife, Linda, have six grown children, including sons John and Scott, who run the Johnny Miller Golf Academy at Palm Beach (Fla.) Polo & Country Club; and son, Andy, a member of the PGA Tour. During final round play at the 2002 U.S. Open at Bethpage, Andy sunk a hole-in-one – on Father’s Day – 20 years after his father’s hole-in-one at the 1982 U.S. Open at Pebble Beach.

In addition to being devoted to his family, Miller’s other passions are fishing and golf instruction.

He recently formed the Johnny Miller Junior Golf Association, which opens the door for hundreds of young people who normally would not have the opportunity or the finances, to learn the game of golf.