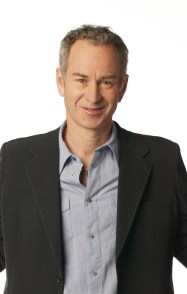 McEnroe commenced commentating for NBC in May of 1992 as an analyst on NBC Sports’ French Open broadcasts and in June of that year he made his debut with NBC’s Wimbledon telecasts.

He is known worldwide for his occasional abrasive outbursts on court and the now famous quote at Wimbledon, “You Cannot Be Serious!”. McEnroe has consistently stunned the tennis world with his exploits. He quickly became ranked number one in the world early in his career in both singles and doubles and dominated tennis in the eighties, winning three Wimbledon titles, four U.S. Open titles and countless other events. McEnroe began his professional tennis career in 1978, and for more than 20 years was one of the top-ranked players on the men’s professional tennis circuit. In 1979, he won his first Grand Slam title at that year’s U.S. Open. Including that win, McEnroe has won 77 career singles titles, including seven Grand Slams (Wimbledon in 1984, ’83, ’81 and the U.S. Open in 1984, ’81, ’80 and 1979). McEnroe was ranked No. 1 in the world four straight years, from 1981 through 1984 and also helped lead the United States to five Davis Cup championships in 1992, ’82, ’81, ’79, and 1978. In addition to his singles crowns, McEnroe won 78 doubles titles, the most recent being in San Jose, CA in 1981 when he and Jonas Bjorkman won the doubles title 12 years after he played in his last tour event.

In July 1999, McEnroe received the ultimate achievement in tennis for his outstanding career when he was inducted into the International Tennis Hall of Fame. McEnroe has also managed a very successful broadcasting career, having earned his first Sports Emmy nomination in 1998 for his outspoken and precise analysis. He currently offers his insights and unique style serving as an analyst for Australia’s Fox Sports coverage of the Australian Open, NBC and the Tennis Channel’s coverage of the French Open, ESPN and BBC’s coverage of Wimbledon and CBS and ESPN’s coverage of the U.S. Open. McEnroe still competes on two men’s professional senior circuits, “The Champions Tour” and “The ATP Champions Tour”, as well as a number of exhibition and special events across the globe.

McEnroe has not limited himself to tennis and has been an author and actor in various roles (30 Rock, CSI NY, Curb Your Enthusiasm, Saturday Night Live, Anger Management, Jack & Jill, Mr. Deeds etc.). His memoir, “You Cannot Be Serious” reached #1 on the New York Times nonfiction best-seller list in 2001, and was also ranked #1 on the London Times best-seller list.

McEnroe currently resides in Manhattan with his wife, rock star Patty Smyth, and their children.