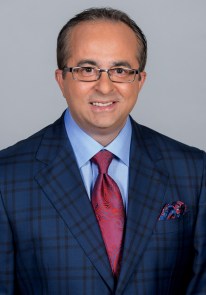 Joe Beninati is the play-by-play announcer for NBC Sport’s live-game coverage of the Washington Capitals, a position he has held since 1994.

An eight-time Emmy Award-winner, Beninati also regularly provides play-by-play for NBC Sport’s coverage of college sports, including football and basketball, and has served as the network’s announcer for its coverage of the Washington Kastles of WorldTeam Tennis.

In addition to his duties with NBC Sports, Beninati spent six seasons announcing NHL games for Versus, which is now NBC Sports Network. He has also called hockey games during the NHL regular season, Stanley Cup Playoffs, and World Cup of Hockey for other national outlets, including ESPN and NHL Radio, and served as the radio announcer for Westwood One’s coverage of the 2002 and 2006 Olympic Winter Games.

Beninati is also recognized as one of the leading announcers in the sport of lacrosse. He calls collegiate regular season and NCAA Tournament action on ESPN and ESPNU. He has also spent more than a decade providing play-by-play for ESPN’s Major League Lacrosse coverage. His experience also includes four seasons calling college football for Versus and Westwood One.

A graduate of Bowdoin College, where he spent two years as sports information director, Beninati has a bachelor’s degree in biology.