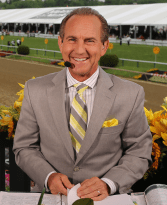 Hall of Fame jockey Jerry Bailey serves as an analyst for NBC Sports’ horse racing coverage, including the Triple Crown and the Breeders’ Cup World Championships. Bailey has served in this capacity for NBC Sports since 2012, and has covered two historic Triple Crown winners during this time (American Pharoah in 2015, Justify in 2018).

Regarded as one of the greatest jockeys of all-time, Bailey’s mounts won 5,893 races and $296 million during a 31-year riding career. He won each Triple Crown race twice; has a record five wins in the Breeders’ Cup Classic; notched a record four victories in the Dubai World Cup, the world’s richest race; and is the only jockey to ever win America’s Eclipse Award for Outstanding Jockey seven times, including an unprecedented four straight years (2000-2003).

Following his retirement from racing in January 2006, Bailey began his broadcast career as an analyst for ESPN in the summer of 2006. He served in this role until he joined NBC Sports six years later.

Bailey was inducted into the National Racing Hall of Fame in 1995. He was chosen by his peers to receive the George Woolf Memorial Jockey Award in 1992, which honors riders whose careers and personal character earn esteem for the individual and the sport of racing. In 1993, he also received the Mike Venezia Memorial Award, honoring jockeys who exemplify extraordinary sportsmanship and citizenship, from the New York Racing Association.

Bailey is a native of Dallas, Texas and currently resides in South Florida.