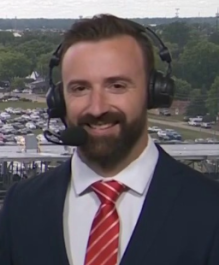 INDYCAR fan-favorite and veteran driver James Hinchcliffe serves as an analyst for NBC Sports’ INDYCAR coverage, after joining the company in Dec. 2021.

Alongside play-by-play voice Leigh Diffey and analyst Townsend Bell, Hinchcliffe is part of NBC Sports’ lead INDYCAR commentary team. In addition, Hinchcliffe serves as an analyst for select IMSA races. He made his NBC Sports on-air debut as an INDYCAR and IMSA guest analyst during the 2020 season.

Hinchcliffe spent a decade in INDYCAR which included six race wins and the 2011 NTT INDYCAR Series Rookie of the Year award. He was also awarded the INDYCAR Fan Favorite Award in 2012 and 2018.

Off the track, Hinchcliffe appeared on season 23 of Dancing with the Stars and finished in second place in 2016.

Hinchcliffe is a native of Ontario, Canada.