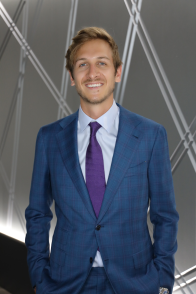 One of the most versatile young voices in sports today, Jac Collinsworth is equally comfortable in the booth or studio, calling or hosting many of NBC Sports’ most high-profile events.

A student of broadcasting since childhood, Collinsworth is living his dream of working on many of the most-watched events in sports, including Super Bowl LVI, three Olympic Games and the Indianapolis 500.

He was a USA Network host for the 2022 Beijing Olympics, an on-site contributor for Peacock’s Tokyo Tonight during Tokyo 2020, and also served as NBC Olympics’ first-ever social media correspondent at the 2016 Rio Olympics, interviewing athletes as a part of the Olympic Late Night with Ryan Seacrest team.

Collinsworth was a co-host for NBC’s Super Bowl LVI Pregame Show, his first Super Bowl, and worked his first Indianapolis 500 anchoring pre-race coverage on NBCSN in 2021. Collinsworth has also served as a co-host and reporter for NBC Sports’ NASCAR coverage and play-by-play voice of Atlantic 10 college basketball. He joined NBC Sports in March 2020.

During the 2017-19 NFL seasons at ESPN, Collinsworth interviewed star players and coaches — often in unconventional settings — showing their personalities and telling their stories. He also anchored NFL Live and hosted Sunday NFL Countdown segments. In July 2019, he was named host of The Huddle, the signature football program on ACC Network.

Born in Fort Thomas, Kentucky, Collinsworth is a 2017 graduate of Notre Dame University with a degree in Film, Television and Theatre.