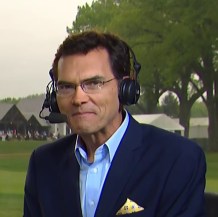 Boone’s experience calling golf extends to his work with CBS Sports, anchoring extended coverage of major championships, including “Amen Corner Live” at the Masters and the morning pre-game coverage at the PGA Championship.

His experience also extends to sports radio, with his radio broadcast assignments including the PGA TOUR (where he was the signature voice for the original PGA TOUR Radio Network in 1997), the Masters and U.S. Open for golf, along with radio coverage of college football, college basketball and college baseball competition.

Previously, Boone also wrote a weekly column for PGA.com, entitled Grant Me This.

A native of Nashville and nephew of legendary entertainer Pat Boone, Grant is a 1991 graduate of Abilene Christian University’s department of Journalism and Mass Communication. In 2001, in his first year of eligibility, Boone was honored by his alma mater with the Gutenberg Award for distinguished journalistic achievement. Boone and his wife have been married since 1991 and have three children.