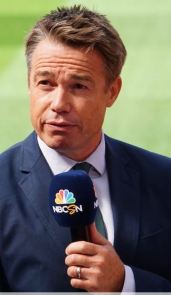 Graeme Le Saux has served as a Premier League analyst since NBC Sports kicked off its exclusive U.S. media coverage in the 2013-14 season.

Prior to his broadcasting career, Le Saux played professionally in England as a left-back and midfielder for nearly two decades. After starting out with Chelsea, Le Saux moved to Blackburn Rovers in 1993. In 1994-95, Le Saux started 39 league matches as Blackburn won the Premier League title, their first top-flight title in 81 years. He then returned to Chelsea in 1997 for approximately $8 million, a then-record transfer fee for an English defender. Le Saux won 3 major trophies during his second stint with the Blues. He then joined Southampton in 2003 before retiring from professional football in 2005.

At the international level, Le Saux won 36 caps for England, including four at the 1998 FIFA World Cup in France.

Le Saux is also a published author, a trustee of the UK-based charity Fields in Trust, and an ambassador for the Football Foundation. In addition, he sits on two Football Association boards. He is also a board member and consultant for RCD Mallorca, who recently won back-to-back promotions to earn a place in La Liga. 2019-20 will be the club’s first in Spain’s top flight since 2012-13