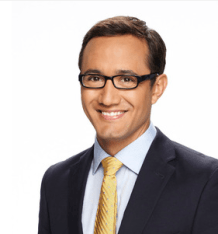 Gadi Schwartz makes his Olympic debut as a reporter for NBC Olympics at the 2016 Rio Games.

Schwartz is currently a correspondent for NBC News based out of the Los Angeles bureau. Before joining NBC News, Schwartz worked for KNBC, an NBC owned-and-operated television station located in Los Angeles, Calif., contributing weekly reports to the 5 p.m., 6 p.m. and 11 p.m. news. Schwartz joined KNBC after spending nearly a decade at KOB-TV, the NBC affiliate, in Albuquerque, N.M., where he was a weekend co-anchor and managing investigator for the “4 On Your Side” Investigative Unit.

The son of Sergio Schwartz, a former journalist for Univision in Albuquerque, Schwartz spent much of his childhood shadowing his father. Of Hispanic descent and fluent in Spanish, Schwartz was born in Guatemala City, and moved with his family to Belen, N.M., and later to Albuquerque when he was seven.

Over the course of his career, Schwartz has received multiple industry awards, including two honors from the New Mexico Broadcaster’s Association for ‘Best Investigative Reporter’ and ‘Best Reporter.’ He also received a Rocky Mountain Emmy Award for ‘Feature Reporting’ in 2012, was recognized for “Best General News’ and ‘Best Editing’ by the Associated Press New Mexico.