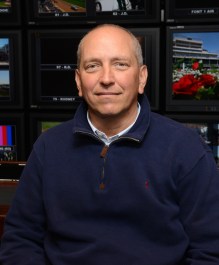 Drew Esocoff, the director of NBC’s Sunday Night Football. In Sept. 2022, Esocoff begins his 23rd season as the director for an NFL primetime game, and his 17th season directing SNF.

On November 16, 2017, NBC Sports, led by Esocoff and executive producer Fred Gaudelli, presented the first NFL game with the primary live coverage coming from SkyCam. Three weeks earlier on October 22, NBC’s “dual” SkyCam coverage received widespread acclaim from viewers when it was pressed into action due to fog during Sunday Night Football. In that game, the Falcons-Patriots Super Bowl LI rematch, fog rolled into Gillette Stadium late in the first half. After halftime, SkyCam technology provided the best camera angles to offer consistent and clear views of the live action.

Esocoff has also directed NBC Sports’ Triple Crown horse racing coverage since 2011, including the historic Triple Crown runs by American Pharoah in 2015 and Justify in 2018.

Esocoff previously spent six years as director of ABC’s Monday Night Football. He joined ABC Sports as a director in August of 1990.  Esocoff also directed coverage of the NBA on ABC, including the NBA Finals.

Prior to joining ABC Sports, Esocoff directed many of ESPN’s marquee events, including college basketball and football, hockey and boxing. He also served as the director for SportsCenter and Baseball Tonight.

Esocoff, a graduate of Colgate University with a bachelor of arts in political science, resides in West Redding, Conn., with his wife, Katrina. They have two adult children.