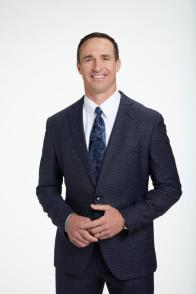 Drew Brees will make his Super Bowl broadcast debut when he serves as an analyst for NBC’s Super Bowl LVI Pregame Show on February 13, 2022.

Brees, who amassed an unprecedented collection of records, milestones and accolades during a 20-year NFL career as quarterback with the New Orleans Saints and San Diego Chargers, joined NBC Sports in March 2021 and serves as a studio analyst for Football Night in America and game analyst for Notre Dame Football.

He led the Saints to victory in Super Bowl XLIV and was named the game’s MVP. In his career, Brees was selected to 13 Pro Bowls, won two Offensive Player of the Year awards, is the NFL’s all-time leader with 80,358 career passing yards, ranks second all-time with 571 career passing touchdowns and shattered the league record with a touchdown pass in 54 consecutive games.

In 2003, Brees and his wife, Brittany, established the Brees Dream Foundation, which has contributed more than $45 million to help improve the quality of life for cancer patients and provide care, education and opportunities for children and families in need. In 2006, Brees won the Walter Payton NFL Man of the Year Award, one of the league’s highest honors that recognizes a player for his excellence on and off the field.

Prior to his NFL career, Brees played quarterback at Purdue University. He was a two-time Heisman Trophy finalist, won the Maxwell Award as the nation’s top collegiate player in 2000 and led the Boilermakers to a Big Ten championship and Rose Bowl appearance that same season.