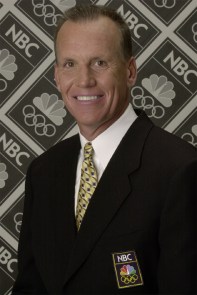 Doug Collins serves as a men’s basketball analyst during the 2016 Olympic Games. Rio is Collins’ fifth Olympics with NBC in this role.

Collins originally joined NBC Sports Group in March 1998 as an NBA game analyst working alongside play-by-play announcer Bob Costas and later Marv Albert. He served as a NBA analyst for 11 years at Turner Broadcasting, and currently works as an NBA studio analyst for ABC and ESPN.

As a player, Collins starred with the Philadelphia 76ers for eight seasons after being drafted out of Illinois State with the first overall selection of the 1973 NBA Draft. A four-time NBA All-Star who averaged 17.9 points per game in his career, Collins led the Sixers to three playoff appearances and the NBA Finals in 1977.

Collins was a member of the 1972 U.S. Olympic team in Munich that lost the gold medal game in highly-controversial fashion to the Soviet Union. He sank two free throws with three seconds left to give the U.S. a 50-49 lead. However, after two resets of the clock to three seconds and much confusion by the referees, the Soviets scored on a length of the court pass followed by a lay-up to win the game and the gold. The U.S. team, to this day, has refused to accept their silver medals.

Collins is a graduate of Illinois State University and currently resides near Philadelphia with his wife.