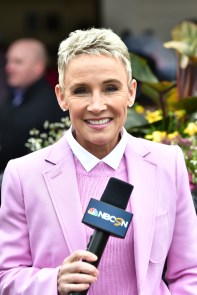 Donna Brothers, who retired in 1998 as the second leading female jockey in the nation by money earned, serves as a reporter on NBC Sports’ horse racing coverage, including the Triple Crown and the Breeders’ Cup World Championships. On horseback, Brothers was the first to interview victorious jockeys after their historic Triple Crown victories in the Belmont Stakes by American Pharoah (Victor Espinoza) and Justify (Mike Smith).

Brothers joined NBC Sports in 2000 for the network’s broadcast of the Breeders’ Cup World Championships and has been part of NBC’s Eclipse Award-winning broadcast team since. In addition to the Kentucky Derby, Preakness Stakes, and Belmont Stakes, Brothers has covered the Hambletonian Stakes, the Rolex Three Day Event, the World Equestrian Games, the AQHA World Championship Show, and Professional Bull Riding for NBC Sports.

In 2018, Brothers received the Jim McKay Award for Excellence in Broadcasting, an award received from her peers, both in television and journalism.

In 2014, the Sports Illustrated Media Awards recognized Brothers as the best sideline reporter. Wrote Sports Illustrated: “Brothers plies her trade not on the sidelines but on a saddle, as NBC’s on-track reporter for horse racing. Year after year, she does excellent work, interviewing jockeys before and after Triple Crown races, always with an eye toward providing information for viewers…Always smart and prepared with her questions, she’s a huge part of a consistently excellent NBC production.”

Brothers, one of the most decorated female jockeys of her time, retired in 1998 with more than 1,000 career wins and ranks second on the money list behind Julie Krone.  Brothers hails from a family of riders: and her mother, brother and sister were all jockeys. Her mother was one of the first half dozen of women to be licensed as a jockey in 1969.

Brothers began her professional career as a jockey in 1987 at age 21.  Throughout her esteemed career, Brothers was one of D. Wayne Lukas’ first call jockeys in the 1990s and rode numerous stakes winners for the trainer, including Hennessy, Serena’s Song, Boston Harbor, Golden Attraction and Country Cat.  Brothers finished second on Hennessy in the Breeders’ Cup Juvenile in 1995 at Belmont Park and won stakes on both Golden Attraction and Country Cat. She rode Serena’s Song to a second-place finish in the last race of the filly’s distinguished career, at the time making Serena’s Song the leading money-earner of all time among female thoroughbred.

In 1998, Brothers began her broadcast career working as an in-house interviewer for the Fairgrounds in New Orleans.  In the spring of 1999, she joined Mike Battaglia as a racing analyst for Churchill Downs’ “Paddock Preview” show.  Brothers has also done on-location work for TVG, the horseracing network.

In 2011 Brothers wrote Inside Track: Insider’s Guide to Horse Racing. The book is in its second printing and is intended to bridge the gap between the novice horse racing fan and the, at times, complicated sport of horse racing.

She serves on the executive boards of the Thoroughbred Aftercare Alliance and the Thoroughbred Idea Foundation. She is a former board member of the Backside Learning Center at Churchill Downs and still serves on their fundraising committees. She is on the advisory boards of the University of Kentucky Jockey & Equestrian Initiative (which studies, among other things, concussion protocol) and Boys & Girls Haven of Louisville, KY.