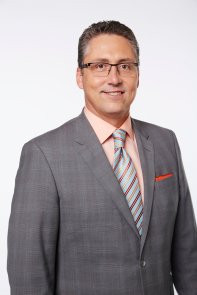 With a reputation as one of the most trusted broadcasters in hockey, Dreger brings viewers inside the game with world-class reporting on trades, rumors, and all the latest news from around the league.

Dreger’s role at TSN includes his work on their hockey panel, and regular contributions to SportsCentre, That’s Hockey, TSN Radio and TSN.ca.

As TSN’s Hockey Insider, Dreger relentlessly covered the NHL lockout in 2012-13. When news of a tentative agreement between the NHL and NHLPA broke in the early hours of January 6, 2013, Dreger followed the story all night long, reporting live from the streets of New York City and finally confirming that a tentative agreement had been reached at 5 a.m. ET.

Dreger is also one of the most followed media personalities in Canada on Twitter, with more than a million followers.

Dreger grew up in Saskatchewan and broke into the broadcast industry in 1987 at CJGX Radio in Yorkton, Sask., later moving to CTV Winnipeg from 1993 to 1997 as a sports anchor and hockey reporter.