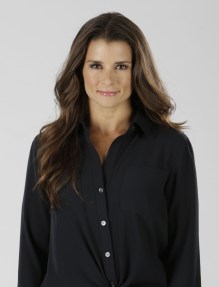 Patrick immediately broke barriers and set numerous records when she joined the circuit in 2005. During her first season, Patrick became the first woman to lead laps and earn a top-five finish in the Indianapolis 500 on her way to Rookie of the Year honors. Three years later, she made history again as the first woman ever to win an open-wheel race in a major series with her victory in the 2008 IndyCar Series Indy Japan 300.

In 2013, as Patrick transitioned to the NASCAR Cup Series, she made headlines with her record-setting performance in the 55th running of the Daytona 500. She became the first woman to win a NASCAR Cup Series pole and finished in eighth place, the highest finishing position ever for a woman in the “Great American Race.”

In 2018, Patrick closed out her racing career with the “Danica Double,” competing in both the Daytona 500 and the Indianapolis 500. Voted by fans as INDYCAR Series Most Popular Driver six consecutive years (2005-2010) and Xfinity Series’ Most Popular Driver in 2012, Patrick earned seven top-ten finishes in the NASCAR Cup Series, and 20 top-five finishes in INDYCAR throughout her racing career. Patrick shattered another glass ceiling in 2018 when she became the first female host of the ESPY’s – ESPN’s Sports Award show.

Since retiring from racing, Patrick’s focus has shifted to her role as an entrepreneur and business owner. She has launched the clothing line, Warrior by Danica Patrick; authored a book, Pretty Intense; and is the sole proprietor of Somnium, a vineyard in Napa Valley, California.