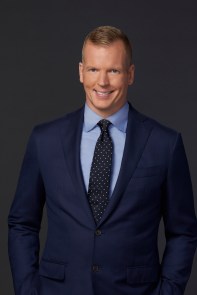 Before joining NBC Sports in 2017, Simms served as a football analyst for FOX Sports and CBS Sports. He was also a co-host of Bleacher Report’s digital program Simms and Lefkoe with Adam Lefkoe.

Prior to his broadcasting career, Simms’ NFL career included stints with the Tampa Bay Buccaneers, Tennessee Titans and Denver Broncos from 2003-2010. He also served as a coaching assistant for the New England Patriots in 2012. Simms played collegiate football at the University of Texas (1999-2002), and was named USA Today’s High School Offensive Player of the Year in 1998. He is the son of former New York Giants quarterback and Super Bowl XXI MVP Phil Simms.

Simms lives in Connecticut with his wife Danielle and their family.