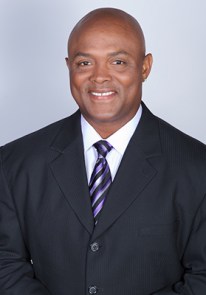 Former Redskin and NFL great Brian Mitchell is the host of NBC Sports’ daily talk and entertainment show, SportsTalk Live with Brian Mitchell, and an NFL analyst for the network’s news and analysis programs.

As a co-host for SportsTalk Live, which launched in January 2012, he delivers extensive analysis and opinion covering the top regional and national sports stories nightly. As an NFL analyst, he is featured on the network’s Washington Redskins game-day shows, Redskins Kickoff and Redskins Postgame Live, and contributes to its daily news program, SportsNet Central.

As a player, Mitchell spent 14 years in the NFL as a return specialist and running back from 1990 to 2003, including 10 seasons with the Redskins. He also spent three years with the Philadelphia Eagles and one with the New York Giants. In 223 games, he gained more than 23,000 all-purpose yards, which is second on the all-time NFL list. He recorded 13 career special-teams touchdowns, which also ranks second in NFL history.