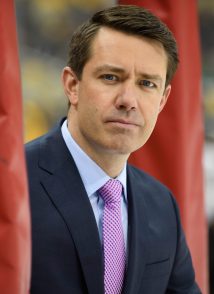 Originally a first-round pick by the Philadelphia Flyers in the 1995 NHL Draft, Boucher’s NHL career spanned 13 seasons. The veteran netminder played for seven different NHL teams, and was a member of the Philadelphia Flyers’ squad that appeared in the 2010 Stanley Cup Final Boucher holds the NHL record for the longest shutout streak by a goaltender, holding the opposition without a goal for more than 332 minutes during a five-game span as a member of the Phoenix Coyotes during the 2003-04 season.

In addition to his contributions to NBC Sports Group’s NHL coverage, Boucher serves as an analyst for the NHL Network and for NBC Sports Philadelphia’s telecasts of Philadelphia Flyers games.

A native of Woonsocket, R.I., Boucher currently resides in the Philadelphia area with his wife and 2 children.