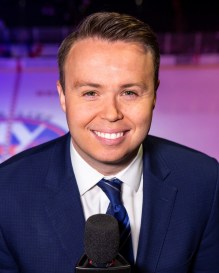 Burke previously worked with the Utica Comets (AHL), where he served as play-by-play commentator, as well as pre-game, intermission, and post-game host since 2013. Burke was also part of the television team for the AHL All-Star Classic in 2015, and was honored after the season with the league’s James H. Ellery Award for “outstanding media coverage.” In addition, since 2012, Burke has appeared on Fox Sports Net and Fox Sports 1, calling college football and basketball.

Burke has also previously called some action in the NHL, serving as fill-in radio play-by-play announcer on KMOX for the St. Louis Blues from 2009-2012. And from 2008-2013, Burke handled the play-by-play for the Peoria (IL) Rivermen, The St. Louis Blues affiliated team in the AHL. He also served as the Director of Communications for team during his tenure there. Burke got his start in professional hockey with the ECHL’s Wheeling Nailers (WV) where he was named ECHL Broadcaster of the Year for the 2007-08 season.