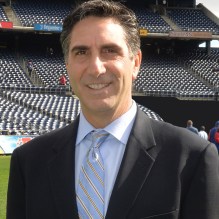 Bob Papa serves as the rugby play-by-play commentator at the 2016 Rio Olympic Games. A veteran in the industry, this will be Papa’s 11th Olympic assignment with the NBC Sports Group. Papa has been an announcer on a variety of sports for each of NBC’s Olympic telecasts since the 1992 Barcelona Games, most recently handling play-by-play duties for ski jumping and Nordic combined at the 2014 Olympic Winter Games in Sochi.

An experienced boxing commentator, Papa has called numerous pay-per-view bouts, including the 1990 heavyweight championship between Evander Holyfield and Buster Douglas. From 1996-2003, he called boxing for ESPN’s Friday Night Fights and from 2007-2013 for HBO’s Boxing After Dark.

From 2008-2010, Papa served as the play-by-play voice for NFL Network’s Thursday Night Football. In 2012, Papa joined Golf Channel’s on-air team as a play-by-play host at select events for the network’s PGA and Champions Tours. Papa has called the last four Bayou Classics featuring Grambling State vs. Southern on NBC as well as the network’s coverage of the U.S. Army All-American Bowl, featuring the nation’s top college football recruits.

Born in the Bronx and raised in Dumont, N.J., Papa is a 1986 graduate of Fordham University’s Gabelli School of Business.

Papa lives with his wife, Jennifer, and their three sons in the New York metropolitan area.