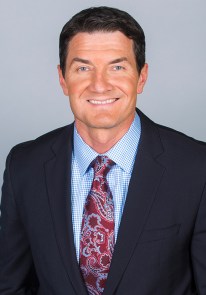 Alan May serves as the analyst for NBC Sports’ Washington Capitals pregame and postgame shows, Capitals Central and Capitals Postgame Live. He also regularly contributes to coverage as an ice-level analyst.

A 15-year veteran of professional hockey as a player and coach, May joined NBC Sports in 2009 to cover his former team. His other broadcasting experience includes work as an analyst for the NHL Network and game-day coverage for the Dallas Stars’ radio flagship, as well as various national and local radio programs.

May played 12 seasons of professional hockey, including five seasons with the Capitals from 1989-90 to 1993-94. In 345 games with Washington, he recorded 27 goals and 42 assists for 69 points and amassed 1,189 penalty minutes, which ranks him fourth on the team’s all-time list. He also appeared in 39 playoff games for the Capitals, including the team’s trip to the Wales Conference Finals in 1990. Overall, he spent eight seasons in the NHL with Washington, Boston, Edmonton, Dallas and Calgary, recording 31 goals, 86 points and 1,348 penalty minutes in 393 games.

May also has three seasons of coaching experience. He served as an assistant coach for the Norfolk Admirals of the AHL, the Tampa Bay Lightning’s top minor-league affiliate, during the 2008-09 season. He began his coaching career as the head coach of the Central Hockey League’s Fayetteville Force during the 1997-98 season and was the head coach of the Lubbock Cotton Kings of the Western Professional Hockey League in 1999-00.